My team and I have been testing NordVPN for a month or so. Our first impressions were very positive, the setup process was a breeze on iOS, Android, and desktop, it took only 5 minutes! One of the perks of using NordVPN is that your actual IP address is hidden from the outside world. There are several ways to establish a VPN connection. It also has a reputation for excellent speed and quickly reestablishing a dropped connection. NordVPN supports OpenVPN and IKEv2/IPSec, on all platforms. NordVPN lets you select one from a list of 62 countries. The majority of NordVPN’s servers are in the United States and the United Kingdom. However, NordVPN also has a plethora of servers the world over, covering several locations across Asia, Central and South America, Central and Eastern Europe, and a handful in India and the Middle East. They also have 5,293 servers available, which is by far the largest network of any VPN. A NordVPN claims the company does not, “store connection timestamps, used bandwidth, traffic logs, or IP addresses.”

From my daily usage, I’ve noticed no network slowdowns while using it. The same goes for the others who tested NordVPN. One nice feature I’ve noticed is that NordVPN attempts to connect you to the least congested server in your preferred location, which is a plus for those who need all the bandwidth they can get. We can all happily report that Netflix does indeed work with NordVPN running (when tested). However, your mileage may vary. On our desktop computers, it was the same way. No performance issues arose during our testing. One big pitfall we’ve noticed is that our school’s technology department blocks the ports/connections that NordVPN uses. But, this isn’t NordVPNs fault. 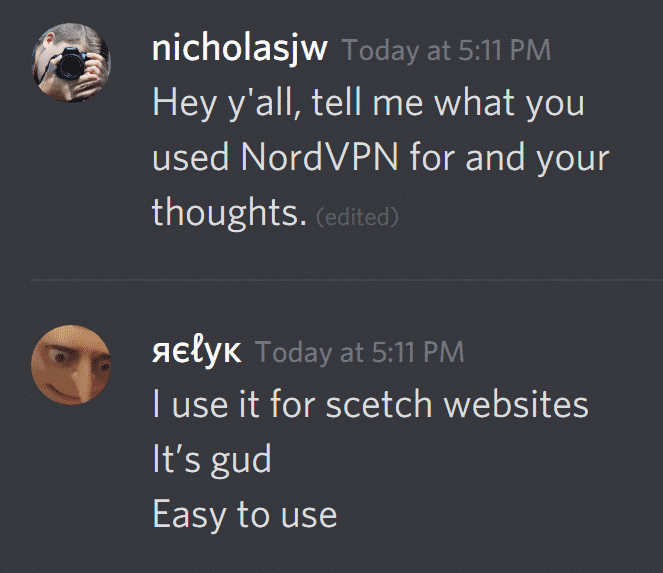 This is what one of my employees has to say, he’s not good at spelling, but you get the point.

You should get it. Granted, you can get a VPN for free. But what are you risking? Don’t take the risk. Get a VPN with a sleek user interface, and a VPN with the most servers around the world. Get NordVPN via our affiliate link.